The Eternal Sunshine of the Elfin Mind


Doesn’t it seem like we JUST started the month of September? And here it is, dang near over? Well, TE (The Elf) can testify to the business of this past week in the Elfin kitchen! So, as we are wont to say “Let’s git all up in it” (Thanks, Jill Conner Browne aka Her Royal Highness The Sweet Potato Queen!)
A quick report on Big Solid’s birthday dinner of last week…we made Porq chops from the cookbook Seitan and Beyond by Skye Michael Conroy. One of the steps was making a simmering broth for the chops…well, we chose to go the roasted vegetable route and, BOY HOWDY, were we ever pleased. The broth was so much richer in depth, color, fragrance and taste. 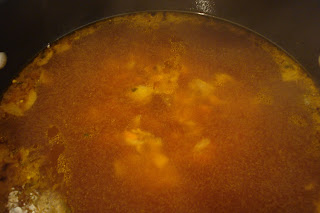 Suffice it to say that they porq chops turned out quite nicely and we had them pan-fried with cole slaw (vegan mayo and non-seasoned rice wine vinegar). Here’s a last minute pic before they got all gobbled up. 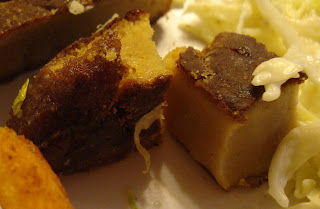 Since it was The Elf’s first go at this new analogue, we learned some lessons for the next time. AND there WILL be a next time. Oh, and before we forget…that simmering broth can be used as a soup base. It is THAT good! We are also very interested in attempting the Pulled Porq! 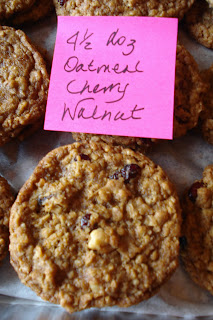 We spent the majority of the week in preparation for a COOKIE-PALOOZA at an annual festival here in middle MS called Wellsfest. In its 32nd year, Wellsfest grew out of a need for a family friendly celebration and fund-raiser for a local charity (selected each year). Wells Methodist Church was (and remains) the catalyst for this event which features, craft vendors, food vendors (no vegan..YET), face-painting, local service organization information booths, and above all, music. Bands from far and wide attend to entertain folks with as big a variety of music as there is. Y’all know The Elf is a huge supporter of a local No-Kill Shelter called the Animal Rescue Fund of Mississippi (ARF/MS). We always have a tent at this event and bring dogs out for possible adoption. This year, The Elf decided to bake vegan cookies to sell to help with fund-raising. And bake we did!! Between Tuesday and Thursday, we baked 14 dozen cookies to have on hand. Tuesday and Wednesday, we made LOTS of cookie dough – 9 batches in all. And on Thursday, we did a hellatious amount of bakin’! Knowin’ how most folks LOVE an oatmeal cookie, we provided a variety. Starting with Oatmeal Raisin Walnut early Thursday morning

we wound up with 5 dozen 3” cookies. You can see a large pan of them on the dining room table. 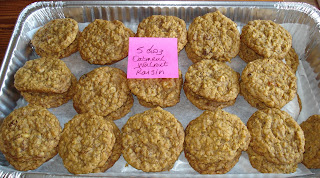 and an up-close and personal view. 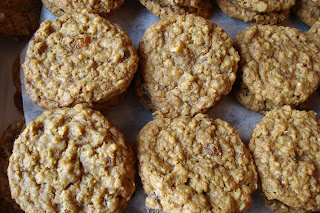 Next up was another variation that seemed to be popular with the shelter staff (The Elf’s very willing cookie tasters), Oatmeal Cherry Walnut. We were able to get 4 ½ dozen out of those batches. 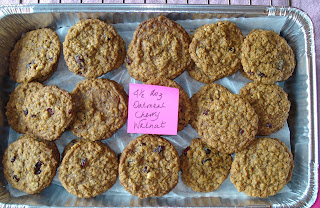 And last, but of course not least, 4 ½ dozen Oatmeal Chocolate Chip cookies. 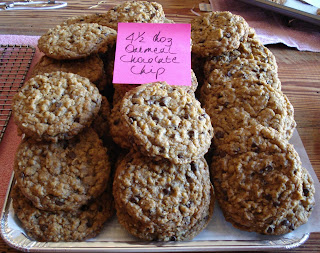 They all SOLD OUT with the Chocolate Chips going first. Note to self, make MORE Chocolate Chip cookies next time!! Here’s The Elf hers-elf in a candid shot! 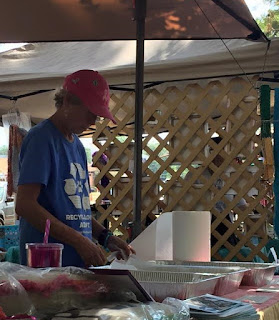 And best of all, this lovely girl named Quinn (the dog, natch) was adopted TODAY! Here she is giving her stamp of approval to one of the cookies (no chocolate or raisins though) 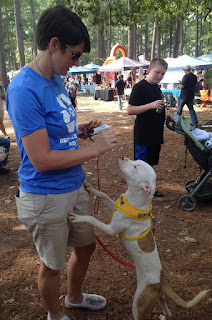 We saw a recipe during the week from one of our favorite sites, Vegan Richa that we just HAD to try. Called Spicy Avocado and Chickpea Salad, we (for once!) had the ingredients on hand. It was very easy to make and very delicious to eat.
http://www.veganricha.com/2015/09/spicy-avocado-chickpea-salad-sandwich.html
Lastly this week, we prepared the new Smokey Brown Sugar Bacun from, well, you-know-who. OMG! It’s fabulous!! 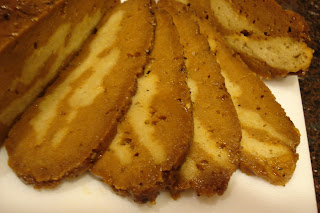 If you missed our ‘show and tell’ blog on the original Bacun, here’s the link to our blog of 5/10/15.
http://the-elf-in-the-kitchen.blogspot.com/2015/05/gone-with-elf.html
OK, y’all it’s a short one this week. This coming Wednesday, your Elf will enter the last year of her 60’s!! Which means we’ll be SIXTY-NINE years old (or young). HOLY CRAP! Did the earth speed up? Oh well, we are just happy to be here, lovin’ every minute of our time doin’ stuffs that is fun. So, til next time, remember to breathe deep, laugh a lot, eat plants, love life, and (a new one) DO EPIC!
The Elder-Elf
Posted by Janne Swearengen at 12:03 PM 2 comments: