Another week with The Elf has come to an end and it just SPED by! At least this week saw a slight bit of cooling than last and we are SO HAPPY! Breathing is so much better when the humidity doesn’t make you feel like you’re under water.
Well y’all, we DID make the Easy Jackfruit Curry last night and we’ll walk through it shortly. BUT I did want to share that The Elf FORGOT it was ‘burger night’. Big Solid was a wee bit disappointed when we mentioned the ‘jackfruit curry’; we could sorta tell when he said with a rather flat affect, “What is that? Did you say flatfruit?”  at which point he politely reminded us, “I thought you changed Burger Nite to Sunday?” So, we re-grouped and decided to go ahead with the preparation of the Jackfruit curry and let the flavors marry overnight. In the meantime, here’s the link to the recipe from Vegan Richa.
http://www.veganricha.com/?s=jackfruit+curry
So, before we get to the curry stuffs, just a recap of the week and some thoughts.

You know, it’s funny how being vegan can offer you the opportunity to promote plant-based eating and we’ve talked about it on this blog before. Well, yesterday was a perfect example. We went to a baby shower for a friend of ours and made some new friends. Some there knew us and had mentioned that we were vegetarian. The lovely woman seated to our left asked and we were able to clarify that we are vegan. She then said she was ‘almost there’ with being able to give up dairy. We found we explored many of the same websites and started talking food…plant-based, of course. We shared our The Elf in the Kitchen card, shamelessly promoting The Elf. Then a woman across the table asked what the difference was between a vegetarian and a vegan, which we were able to answer. Then she asked what prompted our ‘switch’ from carnivore to vegan which gave us yet another opportunity to share the pivotal points of the journey.  The first being reading Eating Animals by Jonathon Safran Foer. 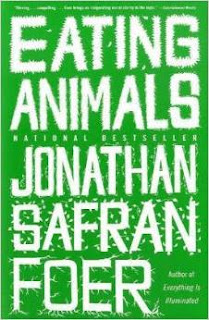 the second being reading The China Study by T. Colin Campbell 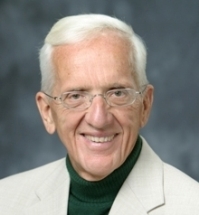 and the final breakthrough moment attending a lecture by Dr. Neal Barnard from the Physicians Committee for Responsible Medicine 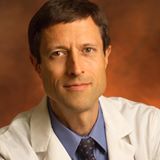 http://www.pcrm.org/media/experts/neal-barnard
We realize that there are some critical responses and comments regarding the books and other pro-plant-based sites, but the bottom line is that in order to make the best decisions for you, you have to be informed. Actually, Eating Animals did it for The Elf…the fact that animals who feel, think and love life are kept in such cruel and horrific situations without so much as a consideration of their suffering is beyond our comprehension. So, if we can lead by example, provide information and sway folks toward a plant-based lifestyle, The Elf is pretty happy.
OK—this week wasn’t exactly a stunning week in The Elf’s Kitchen…actually, it was pretty laid back. There were a couple of recipes of note in the baking department. We figured that the folks at the Animal Rescue Fund of MS are getting pretty tired of the same old cookies every week, so we thought we’d try something different. So, we made two kinda cool muffin/cupcake recipes we found.  The first was a different spin on the cornmeal muffin that includes that most SUMMERY of fruits…blackberries.
http://minimalistbaker.com/?s=blackberry+cornmeal
We opted for mini-muffins to make sure we had enough to go around for the staff at ARF. And, that was both good and not so good, wouldn’t go quite so far as to say ‘bad’.  The good is that we DID have plenty (40 to be exact). The not so good is that we should have lightly sprayed the liner paper since the juiciness of the berries made the batter a bit stickier and there was some ‘stickage’. One of the advantages of being The Elf is we get to TASTE EVERYTHING—it’s part of our Quality Control process, don’tchaknow.
So, you can see them in a close up shot prior to going into the oven and a close up shot of one of the muffins after baking. 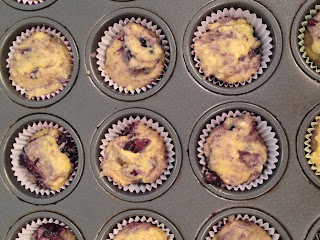 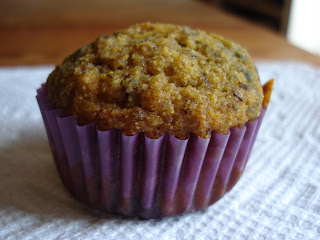 The Oatmeal Cream cupcakes had a bit stiffer batter and we did not have the issue of ‘stickage’. These are delicious!! 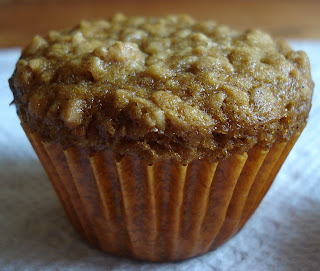 http://www.findingvegan.com/oatmeal-cream-cupcakes/
Also done as mini-cupcakes, we got a good 30 out of this recipe. The cupcake you see (fresh from the oven) is not frosted as the recipe calls for. We will prepare and frost shortly before taking them out to ARF. Picture will appear on The Elf’s Facebook page as well as our next blog.
Then The Elf found the recipe for the Jackfruit Curry mentioned earlier. So, we went to Mr. Chen’s Grocery (LOVE THAT PLACE) to find the jackfruit and sure enough, it was there. 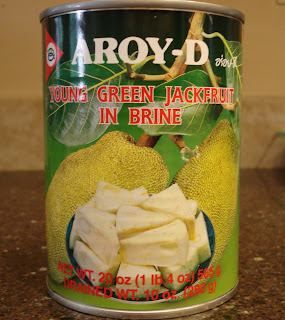 AND we also found some great oyster ‘shrooms and some baby bok choy. 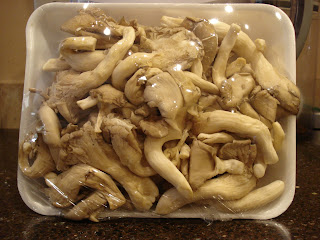 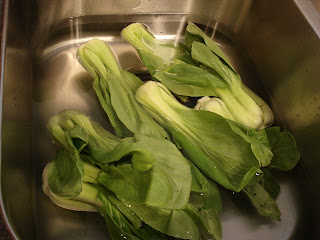 We used the oyster mushrooms and baby bok choy in a stir fry with tempeh and onion Monday night (no picture as we sorta inhaled it). Trust The Elf…it was yummy.
And finally, the Jackfruit Curry. This was so much fun!
First, you get your curry spices all ready. Mustard seeds, black sesame seeds (nigella), and cumin seeds are heated until they start popping and then you add a couple of bay leaves and dried red chilies (we didn’t have the red but found these hotter’n hell yellow ones at the Farmer’s Market last Tuesday). Cook them a bit and then add in onion, garlic, chopped fresh ginger and a wee bit of salt. 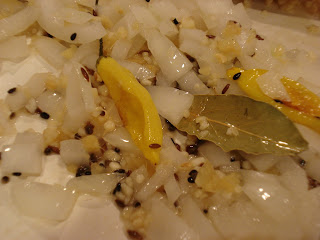 You stir all that up and let the onions become translucent. Then you add the ground coriander, turmeric and some freshly ground black pepper. 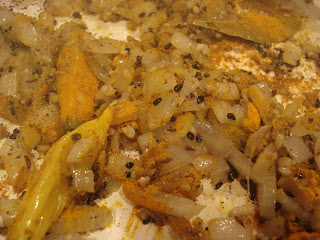 Add some tomato puree and the JACKFRUIT!! We watch our salt intake so we did not add salt at this point as indicated in the recipe. You’ll see two pictures here—the full shot of the skillet with the jackfruit just added and a close-up of the mixture/jackfruit. 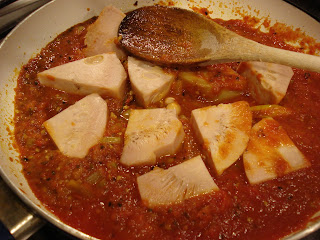 This mixture cooks for about 15 minutes and then you can take a fork and sorta shred the jackfruit. It looks a bit like shredded chicken or crabmeat. Add some water and let it cook down until the sauce is nice and thick and the jackfruit has taken on the flavor of the curry. 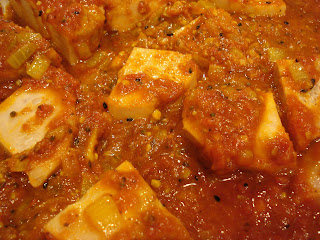 We WILL have this for supper tonight, so you’ll have to wait til the next blog to see the final plating. We’ll serve it over brown rice.
And, my fellow Elfery cookery friends, that’s it for the week!
We will be on hiatus for a week and return on September 4th with some Elfin and culinary adventures from Asheville North Carolina!! Til then, y’all remember to breathe deep, laugh a lot, eat plants and love life.
The Elf

Posted by Janne Swearengen at 9:27 AM No comments: