We are so sorry we’ve been away for a while but other cool things have been happening. You may have noticed that we changed the name of the blog from “To V or Not to V” to “The Elf in the Kitchen”. We have also been shamelessly promoting the blog as well as establishing a Facebook page, aptly named The Elf in the Kitchen. If you are new to this blog, please check it out and ‘like’ us.  You know by now that our purpose is to chronicle the vegan lifestyle we chose on June 30 2013 at the tender age of 67. It’s been one of the most exciting and challenging times of my life and I am richer for it (not money richer but person richer).  We are also trying hard in this NEW YEAR to simplify our lives…so what if we eat the same thing for breakfast for a week. It actually makes life easier and less stressful when one doesn’t have to fret over “WHAT TO FIX FOR SUPPER” or “WHAT TO WEAR” of “WHERE TO EAT”.

~~~~~~~~~~
A while back we mentioned that we wanted to find and share the stories of people who decided to eat a plant-based/vegan regiment after the age of 50. Well, this week, we introduce our first VENERABLE VEGAN!! MEET

My Ascent into a Plant Base Diet

I do not have a noble reason for entering into a vegan diet or in my case a plant based diet.  It was not to save animals (except myself) or some other noble cause.


In March of 2013 I went to see a cardiologist in Jackson, Mississippi.  My EKG was a little abnormal and a CRT scan was performed.  The result was that I had three partially clogged arteries. My doctor wanted me to get a DVD named “Forks over Knives” and a book named “Eat to Live” while we waited for the results from blood tests.  This I did and on April 1, 2013 I went on a plant based diet.  Note I say a plant-based diet and not a vegan diet.

The plant based diet that I follow has more restrictions than a vegan diet. I do not use much if any extra oil, refined sugar or grain and very little salt.   My diet consists of whole grains, tree nuts, vegetables and fruit.  I seldom eat a dessert even if it meets the requirement of the diet.  I keep saying diet meaning things I eat because to me this is a change of life style and not a diet to lose weight.

In the first three months of eating a plant based diet, I lost 30 pounds and reduced my cholesterol by 120 points.  By the end of the first year I had lost 60 pounds and maintained my lower cholesterol. Other benefits have been:

The biggest reason this change has not been hard for me is because of my wife, Margaret.  She also went on the diet.  She lost 20 pounds and stop taking cholesterol medicine.  We plan on staying on with    this change of life style.  In another year and a half, I will find out if my arteries have cleared (or at least very little blockage).  In the meantime, I will enjoy trying new foods and old foods prepared differently than the way I was raised.

My wife, Margaret and I, travel a couple of months every year.  When we eat in a restaurant, we say we are vegans because they are familiar with what a vegan is.  We then select items to adhere as close as we can to the plant base diet.  Some vegan items (such as some vegan cheese made with palm oil) do not meet my requirements.  We have found restaurants very accommodating.  I have never called ahead to request a meal.  When we travel, we rarely have hotel reservations because we may change our direction twice in a day if we see or hear about something that sounds interesting.  We never know where we will be when meal time comes.

I wish I had done this earlier in my life.  I know I most likely would not have had some minor but annoying health problems.  I am not a person that can do something like this halfway.  I am in all the way or not at all. As I have said, I am not into this for any ethical reasons, just health.  Whatever reason a person has, I do believe this is the way to eat.
BON APPETITE!! 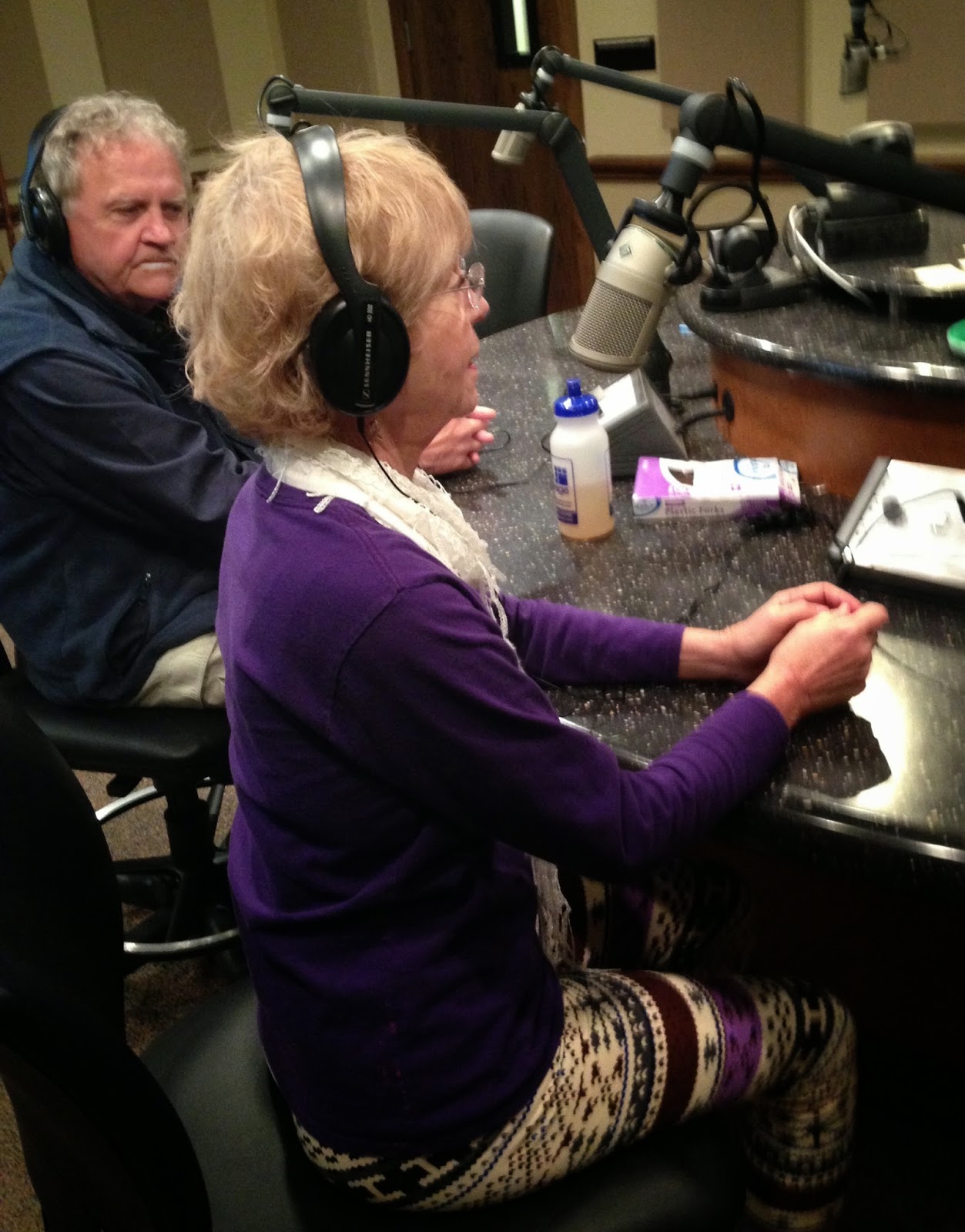 The Elf and Mr. Elf (aka Big Solid) appeared for the second time on the Gallo Show on SuperTalk MS (97.3 FM) to talk more about being vegan and Big Solid about living with one. We also prepared what we called a ‘veganbord’ or a potpourri of vegan goodies for the kind folks at the station to sample. Keeping in mind that all sampled foods were, of course, vegan, here’s what we offered.  Cookies (chocolate chip and dried cherry/coconut/walnut oatmeal), muffins (pear pecan and apple, raisin, walnut), Andouille ‘sausage” (ala The Gentle Chef), ‘sausage’ rolls with two dipping sauces. It appears we surprised the samplers with the tastiness…the sole exception being the Andouille, which rated a B+ instead of an A. And, that was more from a texture sense than taste. I’m tellin’ you right now that the sausage rolls (see recipe and pictures below) are my new ‘go-to’ appetizer. What a terrific recipe…once I remembered to follow the directions correctly, which I did NOT do in the initial batch. Again, sometimes I get in such a hurry I forget to read the directions all the way through before diving in for which, I pay a price of screwing up the preparation OR the outcome.

~~~~~~~~~~
We attended a conference put on by the MS Abolitionist Vegan Society on Sunday November 16 at St. Columb’s Episcopal Church. Organizers Matthew and Alyssa Sikora put together an excellent program to bring information about veganism to the community. The weather was horrible which impacted the size of the crowd. However, it did not dampen the enthusiasm of the speakers (Matthew Sikora, Gigi Carter, Brenda Sanders, and Doll Stanley) or attendees. Plus there was a great cooking demonstration by Alyssa Sikora. There are plans in the works for another conference in the spring.

~~~~~~~~~~
NEW FEATURE!! -- Recipe of the Month!!
This Sausage Roll recipe is absolutely delicious. I screwed it up the first time by not reading all the directions. That was actually a serendipitous event, as I learned several things.  The original recipe was not spicy enough for us…we like REALLY spicy food, so I kicked it up on the second effort. Better but STILL needed more kick…so this weekend, MORE KICK (noted in the recipe with the italicized/bolded type). Another thing we experimented with was making the ‘rolls’ into ‘bites’ by slicing the rolls into half inch rounds. The next experiment will be to freeze the uncooked rounds to see if they can be made ahead of time and then brought out as needed. Whereas the original recipe makes 10 3-3 ½” rolls, the ‘rounds’ option will make considerably more. I am also going to try to figure out the nutritional values as well and will post those at a different time.

As you can see, we had plenty of help from our ‘sous-Elf’ Oskar. Starting with gathering all the ingredients (AFTER YOU HAVE READ THE RECIPE) until the end result...here you go!


In any event, here is the recipe as well as the link to it:

DIRECTIONS
·         The night before, take puff pastry out of freezer and let defrost in the fridge overnight.
·         Either chopping by hand or in a food processor, process the nuts until they are the size of small pebbles
·         Put the nuts into a large mixing bowl. If using stale bread, put the bread into the food processor and process until the bread turns to fine crumbs, then add the bread crumbs into the bowl with the chopped nuts.
·         Half the onion and then cut each half into quarters; add them to the food processor along with the minced garlic. Process them until they become finely chopped, then mix them into the bowl with the other ingredients.
·         Puree the tofu, along with the beef stock powder, smoked paprika, soy sauce, liquid smoke and pepper until completely smooth.
·         Add the tofu mixture to the bowl along with the oats, and mix everything until evenly distributed. Cover and store in the fridge until ready to use.
·         Preheat oven to 425 degrees F and line a baking sheet with parchment paper.
·         Remove your puff pastry from the fridge, take one square and roll out into a 16 x 6 inch rectangle.
·         Spoon the filling lengthwise down the center third of the puff pastry rectangle; lightly brush the opposite boarder with the milk.
·         Roll the pastry and filling lengthwise towards the brushed boarder like a log, sealing with your fingers to close the seam.
·         Slice the roll into 5 3-inch long pieces and place them on the prepared baking sheet.
·         I cut mine into 4 but I recommend cutting them into 5.
·         Make 2 or 3 diagonal cuts in the top of each roll to release steam. Brush the tops of each roll with more milk and sprinkle with sesame seeds. Repeat with the remaining filling and pastry (This my friends is where I screwed up. I kept thinking I had WAY too much filling for one puff pastry but the directions don’t say spoon half the filling, so I didn’t).
·         Bake the rolls for 20 to 30 minutes, or until they’re golden brown and flaky.
·         Let cool slightly and serve with spicy honey mustard sauce, marinara sauce and/or BBQ Sauce.

This recipe can be found with additional pictures at http://www.cookbookaficionado.com/virtual-vegan-potluck-sausage-rolls-with-a-trio-of-dipping-sauces/

What The Elf (who is of course ME) has learned after several efforts at this recipe is you can make smaller logs/rolls and slice them into 1 to 2 inch bite sized pieces and have a great appetizer. Of course, when you slice them into smaller bites, you do need to adjust your cooking time to make sure they don’t turn into charcoal. AND perhaps the best thing of all is that you can freeze the logs and use when needed. In fact, the logs are much easier to slice if they are semi-frozen. I now make a double recipe so we always have a surplus of frozen logs to pop out for sudden needs….like hunger.

So, it appears that 2015 has gotten off to a good start, food-wise. Even Mail Order Annie was tooting her horn over the possibilities of joy and goodness that come from fresh year.

So with that, we will sign off and say we’ll see you in a couple of weeks. In the meantime, y’all, breathe deep, eat plants and love life.


Posted by Janne Swearengen at 12:22 PM No comments: